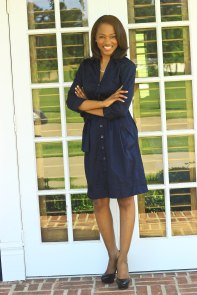 Daryl Joy Walters is a native of Shreveport, Louisiana. She holds a Bachelor of Arts degree in Religion and Philosophy from Wiley College in Marshall, Texas and a specialized certificate from Yale University’s Women’s Campaign School. Also she holds a Master of Divinity degree from Princeton, Theological Seminary in Princeton, NJ

Outside of her academic success, Joy’s life is dedicated to being holistically involved in her community and state. Currently, she is a Democratic State Central Committee Member. She works to shape restorative justice policy from a theological aspect.

Joy previously served five years as the Vice President of Communications to the Young Democrats of Louisiana. In 2012, she was elected to serve the 4th Congressional District of Louisiana at the Democratic National Convention in Charlotte, North Carolina.

During her college years she was highlighted as the “Community Servant of the Year”, the Theta Chapters of Zeta Phi Beta and Omega Psi Phi selected her as “Female of the Year”. ESSENCE Magazine proudly recognized her as “America’s 1st Black Female President.” Since the summer of 2009, when Joy started this journey she has worked as a Senate Aide for the Louisiana State Legislature. and interned for former U.S. Senator Mary Landrieu, BattleGround Texas, Obama for America.

Joy knows that she stands on the shoulders of giants and leaders, who have paved the way for her success. It is for these reasons that she fights passionately for the under-represented and the underserved in our communities.

Daryl Joy Walters is a member of Delta Sigma Theta Incorporated, initiated in the Alpha Iota Chapter. Also Joy is a faithful member of the Mount Canaan Missionary Baptist Church, where Dr. Harry Blake Sr. is the Pastor.